History of the Library

The pride and spirit of the Shirley residents has always played a significant role in weaving the fabric of our community. One of the most prevalent examples of this, is the dedication and support of a town library, providing entertainment, research and reference materials, open free to its citizens. After 220 years, this public institution is appreciated for its important contribution to the well being of our community and its citizens.

In the written words of Librarian Lucy P. Longley, who served from 1950-1972, the beginning of a public library in Shirley started in 1790.

Hazen Memorial Library didn’t come into being until the year 1894 but, however the coals began to smolder as far back as 1790 when several of the larger families of the town, aided by their minister Rev. Thomas E. Whitney, established a library of over 100 volumes. These were the choicest literature of the time, no fiction, but history, geography, biography and science. This collection was of great value when family collections were confined to the Bible, a volume of psalms and hymns, and a few schoolbooks.

In 1839, eighty-seven years ago a small group organized and by means of a membership fee, were able to collect books and magazines for their reading enjoyment. They were offered to the town if it would appropriate a sum of money and start a Library. So, with appropriation of $150.00 a library of sorts was started in a small room. (The building was located on the corner of Main and Mill Streets).

In 1890, the building on the corner of Main and Mill Street held what was known as the Shirley Public Library.

The library was opened Wednesday evenings.

We are gratified to observe that Shirley people have begun to realize what all do not know or appreciate how valuable an institution the library is, not only as a means for entertainment but as a practical help.

Written by the Trustees in the Annual Town Report for year 1890.

For 103 years, the Trustees and volunteers maintained the Shirley Public Library in Shirley Village. It wasn’t until 1892 that when a long looked for library building became an accomplished fact. An esteemed towns-woman, Mrs. Betsy Hazen, bequeathed the town of Shirley the sum of three thousand dollars, to erect a suitable building to be called “The Hazen Memorial Library,” and the gift was augmented by the presentation of one-fourth of an acre of land by Mr. Thomas L. Hazen, as a building lot. The proviso declared that the building must be completed two years after the will was probated.

According to the Trustees in the 1892 Annual Report, generous friends have expressed themselves willing to contribute sums of money, labor and material to assist in meeting the expense of the foundation. 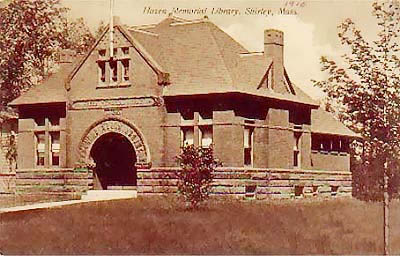 The new library building was completed and ready for occupancy in 1893-an ornament to the town, of which it may well be proud.

Henry M. Francis of Fitchburg was appointed architect and J. Dudley Littlehale was the contractor. The one and one-half story library building, conceived in the Richardsonian Romanesque style was built on a raised foundation of rock faced ashlar with red brick walls and brownstone trim.

For many years volunteers held the position of Librarian. It wasn’t until 1911 that a Miss Grace M. Kilburn was appointed Librarian and a Miss Lura A. White served as an assistant. Miss Kilburn served for 39 years.

For another 103 years, the Hazen Memorial Library held its place on Lancaster Road. The building is still beautiful, however, too small to hold the capacity of materials that were spilling onto the floors. With no room to grow with technology or accessibility a new building was in order.

The new building cost 1.8 million dollars, 45 percent of which was paid by the state, from a grant written by Miss Wade, the rest by a Proposition 21/2 over ride. The people of Shirley helped bring the new facility to fruition.

The architect was Tadd Stahl of Stahl Associates in Boston and the contractor was Colantonio Inc. of Holliston.

That was 20 years ago. Today the Hazen Memorial Library is very proud to make available a world of resources to everyone in the Shirley community.

Our collections now exceed 40,000 materials which include books, DVDs, music CDs, audiobooks on CD, magazines, downloadable media, and large print books are all part of our collection. We have Internet accessible computers, free wireless Internet and an expert staff under the directorship of Debra Roy, to help in all aspects of the library.

The library has a web page www.shirleylibrary.org for around-the-clock computer-based services and fast, easy access to the library catalog, databases, events calendar, and downloadable digital content. The library is fully accessible with everything on one level. Our services for persons with disabilities include an Aladdin Classic Video Magnifier, digital e-books, magazines, audiobooks and videos, large print books, books on CD and Magnifying Lenses.

The Children's Room has a story time for babies, toddlers, and preschoolers, events, demonstrations and a summer reading program.

The Homework Center is available to students of all ages.

Given the past history of the pride and spirit of the Shirley residents, the future of the library looks bright and will maintain its contribution to the well being of our community and its citizens.